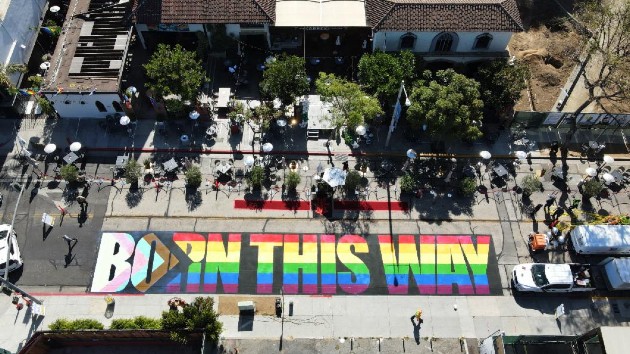 Lady Gaga‘s now-iconic second studio album Born This Way, which celebrated its 10th anniversary Sunday, now has a day honoring its success in one American city.

In a proclamation, West Hollywood Mayor Lindsey P. Horvath announced that May 23 will now be known as “Born This Way Day” and presented the Grammy-winning singer with a key to the city.

Said the mayor of Gaga’s contributions, “Thank you for encouraging us to love ourselves and be proud!”

The city also marked the occasion with a street painting on Robertson Blvd that’s a tribute to the LGBTQIA+ community and the album: It reads “Born This Way” in rainbow-striped letters. The painting will be made available for public viewing until Pride Month ends on June 30.

Gaga’s album has been hailed for its cultural impact and for framing discussions concerning LGBTQ issues, especially via its title track.  The effort also spawned hits “The Edge of Glory,” “You and I,” “Judas” and “Marry the Night.”

In addition, the wildly successful Born This Way sold more than one million copies in its first week of release in the U.S — at the time, the first album in six years to do so — and also inspired the name of Gaga’s charity, the Born This Way Foundation, which supports mental health in young people.

To date, as per Mayor Horvath, Born This Way has been streamed nearly six billion times, sold over 5.2 million copies and was named one of Rolling Stone’s 500 Greatest Albums of All Time.