The secrets behind Harry Styles' "British and eccentric" Grammy looks 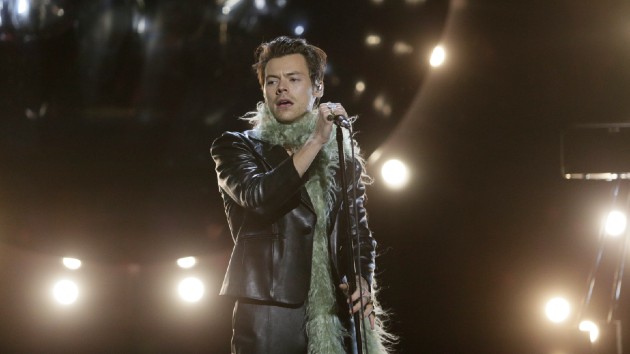 Some fans may have been disappointed that Harry Styles didn’t wear a dress to Sunday night’s Grammy Awards, but it turns out quite a bit of thought went into the outfits he did wear, which his stylist says were designed to be “British and eccentric.”

For his “Watermelon Sugar” performance, Harry rocked a bare-chested look with a cropped leather jacket and pants and a mint-colored boa.  On the red carpet, he wore a green-and-yellow check tweed jacket and V-neck sweater with a lavender boa; he donned checked pants, a solid-color suit jacket, undershirt and a black boa to speak to reporters backstage.  All his finery was designed by Gucci creative director Alessandro Michele.

Harry’s stylist Harry Lambert tells Vogue that his concept for the Grammy looks was “the tradition of English individualism,” as exemplified by groundbreaking rockers like David Bowie.

“This is Harry’s first Grammys, and so we wanted to do something that felt British and eccentric,” says Lambert. “A little bit rock ‘n’ roll and a little bit camp. I hope we did this with the mix of the tweed and the boa, [which is] Britishness, rock’n’roll, and camp all rolled into one.”

For the “Watermelon Sugar” performance, Lambert says they deliberately avoided the pastel-colored scheme of the song’s video and chose something “darker, sexier, and more unexpected.”

“I don’t feel that anyone has seen Harry dress like this before, so the Grammys felt the perfect moment to do this,” says Lambert, who feels the look signaled “the start of a new era.”

“[It is] a sort of full stop after the promotion of the Fine Line album campaign,” he noted. “For stage, it’s sexy, minimal, a bit eccentric but still fun.”